My last day in Belize. Hurricane Harvey bonus day. I look at myself in the mirror. I ran out of hair product two days ago. I’m a shade darker than when I arrived and my beard so much whiter than I realized, is coming in strong. I look like I’ve gone native.

I head down to the docks to meet a ship captain named Percy. I’ve decided to use my bonus day to head into the jungle. The dock smells so strongly of gasoline and sea water I get a little nauseous. Percy is exploding with personality. Before I’ve even settled in the boat he’s telling me of his many accolades, including stories published on him in National Geographic and Esquire magazine. He’s a great guide with no understanding of basic joke structure. He always starts with, “I tell joke”, thereby defeating his purpose. “We’ll go out to sea now and I’ll find Manatees for you to see. I tell a joke! I call my brother and say, release the Manatees, tour is coming”. Then he smiles and waits for

laughter. It’s wonderful. My traveling companions are two couples; an African American couple who aggressively have no desire to interact and a 50 year old Indian man, ponytail to his waist and his wife, a stick with large boobs and bad acne. Indian Rob wins the dubious distinction of being my least favorite traveling companion. He constantly tries to compete with Percy, demonstrating his own advanced knowledge and expertise of all things jungle life. This becomes even more intolerable when we eventually see the small jungle village Percy has lived his whole life in and I discover Indian Rob hails from Flatbush. But it doesn’t sour the day. The trip is like nothing I’ve ever experienced. Dolphins say hello as we set out in the ocean. They’re ten feet off our small boat, bouncing up and down. Soon we’re winding through mangroves, onto the river and into the jungle. I’m in the jungle. It’s a feast for the eyes. I see more creatures, more bugs, more sights than I have time or skill to record. The water is brown and Percy gives stern warnings, “No hands.overboard”. We must listen to all his instructions. Eventually we pull our boat into a tiny strip of land. “Look everywhere you step first. Touch nothing unless I say. If you look up, keep your mouths closed in case the monkeys throw shit at you”. Great tip. “But, if you get hit with monkey shit or piss, it’s good luck man! I’m telling you, I live here my whole life!”. And I’m walking in a jungle. I’m silly happy; a smile ear to ear. I’m transfixed and I’m not sure I have the words to explain.

In addition to creatures, Percy tells us the use for every plant. “This one fixes bed wetters. This bark eases itching mosquito bites. This one puts “lead back in your pencil”. You chew this leaf up and place it on cuts. You boil this bark and drink it to cure upset stomach”. Percy claims he’s never been to a doctor. He learned everything about healing from his Grandma, who lived to 106 and never left the village. When we reach a termite nest Percy places his hand inside. It’s covered when he pulls it out. He eats some “great source of protein! And …” he smashes them up and rubs them all over his arms and legs “best protection against mosquito bites there is. I’m telling you, man! I live here my whole life”. Percy tells us how he goes out in the jungle for days to hunt boars, armadillo, and giant, 20 lb. rats. The rats, he says, are traditional Birthday and Christmas meal. I’m just giddy. Then we hear them. Then I see them; monkeys lounging in the trees above. Percy calls to them and bangs his machete into the tree so they all howl back. The monkeys’ howls reverberate throughout the jungle. It’s other worldly. I’m looking up at monkeys. I am sure to keep my mouth closed. Later on we have to move quick quick quick as the floor crawls with fire ants. A family of bats hang from a tree. It’s so humid you can reach out and touch the moisture. I can take heat, almost welcome it to marry with the adventure. Watch out! Keep moving there’s a snake. The place is alive. Whatever I knew coming in, it’s entirely different to experience it.

Back in the boat, we see baby crocs, varieties of herons, vultures, iguana, sacred
Mayan tree, more snakes. Percy teases, sometimes you see Jaguars swimming across the river, but it’s the one thing we don’t see.

Percy takes us to his village, where he’s lived his whole life. His sister is cooking us lunch. Every person we see he says, “That’s my cousin”. The village is a loosely spread out 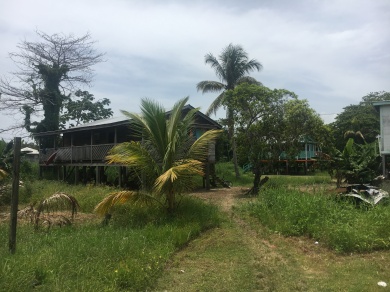 cluster of about 8 structures on the river bank. His sister’s house is three rooms. None of the modern convenances or cleanliness to which we are accustomed. An old woman and two young girls glare at us when we enter and walk off. We’re fed chicken (can’t tell you the spices but very savory and enjoyable) and rice and beans cooked in coconut milk. The skinniest dog I’ve ever seen, tiger printed pitt mix enthusiastically greets me. It’s hard to not give him all my chicken, but I am told this would be an insult. Chickens and roosters wander around. I’m the first to finish and I quickly say thanks and strike out to wander around the island instead of listening to Indian Rob attempt to hold court. It’s crazy crazy hot. What else can I say? It’s filthy, run down, few doors or windows and if there are, no screens. Bits of litter line all pathways like a design. Once again I’m aware of how much stuff I have, how many modern conveniences I swim in. It’s also arrestingly beautiful and remote.  And did I mention hot? I catch Percy on the porch of the “bar” smoking weed with the boys. A different day I might join in but right now I want nothing to dull my senses. I see the village water supply; it’s a rusty pipe against a water stained orange wall. I feel the wealthiest, whitest I’ve ever felt in my life. This town could fit inside one square city block. On the edges, jungle and the river. We get back on the boat. Percy cuts off some stalks of sugar cane for us to chew as a sweet snack on the way back.

As we retrace our journey, Percy tells us the origin of his business. About 15 years ago a white man named Mike #5 (all us white men have same name so he numbers us, I am Johnny #16) found his way to the village. They smoked a lot of ganga and then he hired Percy to show him the jungle and take him hunting. Afterward Mike #5 convinced Percy to take people on jungle tours and spotted him the money to buy new boats and launch the enterprise. Magic Monkey Jungle Tours was born. Now just Monkey Jungle Tour. He laments the government now requires him to have a tour and captains license. I find Percy endlessly fascinating. Did I mention his magic rock that cures all snakebites? “I’m telling you man! I’ve lived here my whole life!”.

Our last stop is to spot Manatees. It’s just glimpses as they pop up for air and dive back. Their tails and the fact the females have breasts, are often thought to be the birth of mermaid legends. It’s almost funny to see up close. The Manatees are endangered here. Straight to jail if you kill them but the brand, new cruise line stop, just 2 years old, has been splitting them open with their propellers. No repercussions. It’s being ignored. The cruise line brings in too much money. 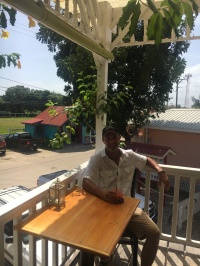 When my jungle tour is concluded I’m wired. I don’t know what to do so I tool around town a bit. It’s 120 degrees with humidity. I sit on a porch and have a mid-day caipirinha and review the photos on my phone from the day’s excursion.

That night I go back to Maya Beach Bistro. It’s the best meal I’ve had here. I’m a fan of doing what works. At night as I wander down the dark road back to my hotel I pass Nate and Andrea just heading out for dinner. They invite me hang with them but I decline. I still need to pack and somehow part of me has already begun to go. But I am sad to say goodbye to new friends.

The trip has come to an end. I’m ready but not to go back to life. I’m ready for what happens next.

The journey home is challenging. 3 flights and over 17 hours in transit. I managed, just as Abraham warned, to scorch my skin. I have heat rash. I make the horrible mistake of watching Silence the endless Martin Scorsese epic about priests being tortured trying to spread Christianity in Japan. I’m anxious to see Harlow and hopeful something has shaken loose. 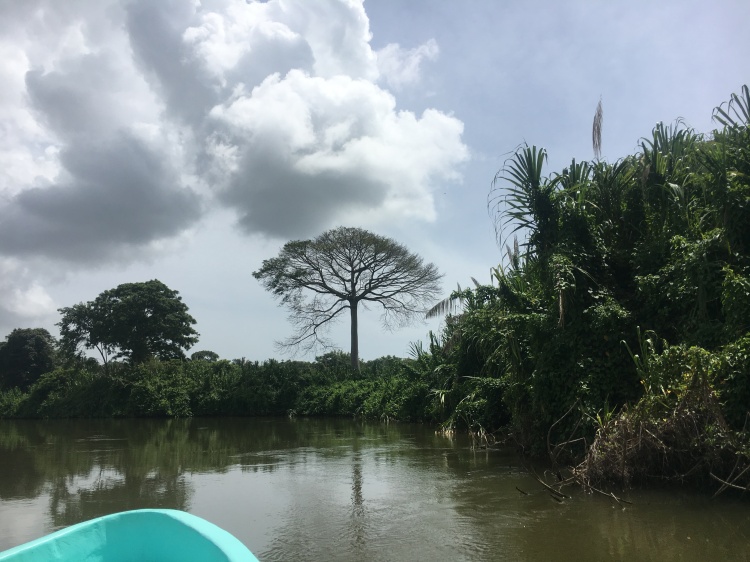 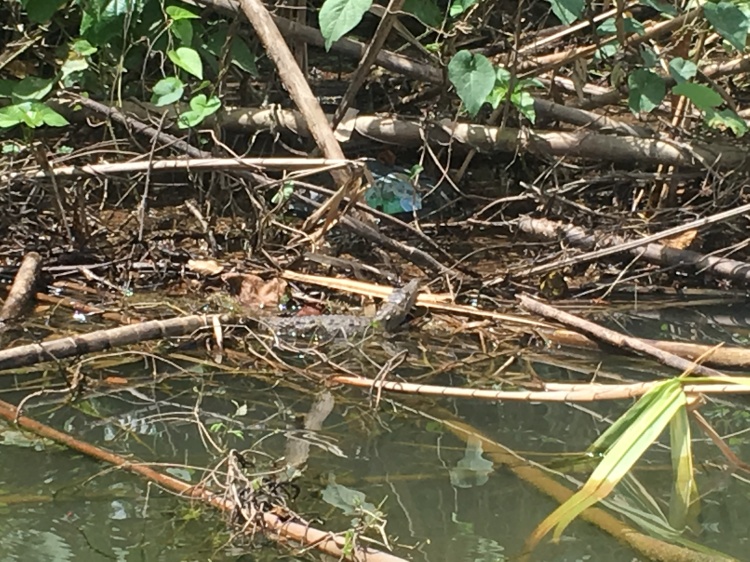 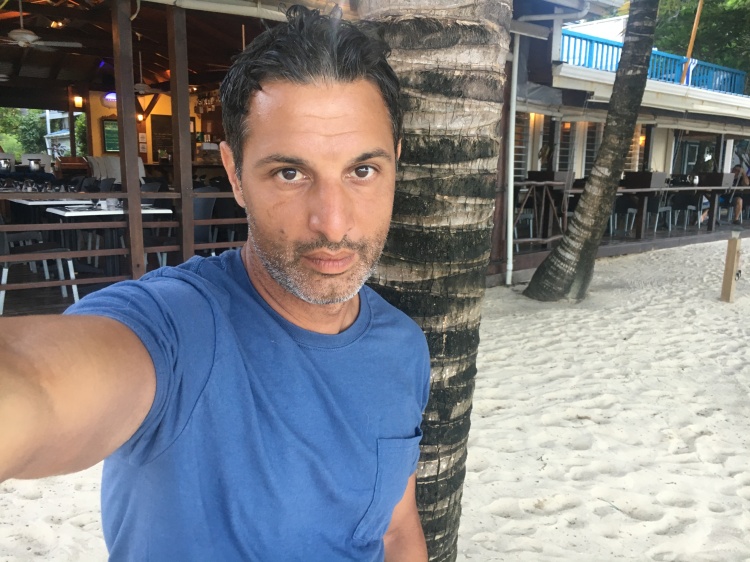