No man ever forgets his first time; the excitement, the nerves, the anticipation, a key moment in the transition from a boy into man. It’s all been theoretical up until this point. Now it’s time to come of age. My first time was back in ’98. It was my first year in New York after college. The Yankees were having a historic season. Auditions were plentiful. I was living in jolly, old Williamsburgh Brooklyn. We got the only reservation we could, 9:45pm on a Tuesday. How it started is classic young love. “Where’d you park?”. “We parked around the corner”. “Nah, that’s no good. Move your car around and park it here, give me $20, I’ll watch it, make sure nothing happens”. “That’s a fire hydrant. I think we’re good around the corner”. “You leave your car around the corner, it wont be here when you get out”. We moved the car, paid the $20 and inside we went to the famous Peter Lugers. My first steakhouse.

Starting with the gold standard has it’s pluses and minuses. That first night at Peter Lugers remains legendary. I could do a blog post about about that night today, twenty years later. I was hooked. I was lucky enough to go back two more times. Peppered in have been a small handful of other Steakhouse visits. Malcolm’s goodbye, Ramon’s bachelor party, these kinds of nights. Men, men eating meat for manliness and manhood. For this post, it’s a trip to Mastro’s Steakhouse in Beverly Hills. Credit where credit is due; this one started with good buddy Tommy saying, “Hey I have this gift certificate for Mastro’s Steakhouse, would that be something you are interested in?”. One week later Tommy and I are navigating Beverly Glen, a winding, dark, through a canyon roadway that serves as short cut from Sherman Oaks in San Fernando Valley to Los Angeles, Westside proper. It’s only appropriate fancy homes and glimpses of the lifestyles of the rich and famous line our approach. I don’t spend much time in Beverly Hills. Once in a while some business reason or other has taken me here, but generally it lives out of my

sphere of operations. Rolling down North Canon Drive in Beverly Hills on a Saturday night is like a taking a bus tour of American wealth, glamour and power. Fancy cars, high end shopping, 4 star restaurants, shiny, opulent and luxurious. It reeks of money. Serious top 1%, sex, plastic surgery, cocaine and infinity pool kinda of money. My 2017 Chevy Cruze with Harlow hair coated back seat must be turning all the heads tonight. There is no street parking in Beverly Hills, I mean, what are we, peasants? So we pull up at the valet for Mastro’s. Out of the car two doorman swing open the grandiose blue-green-white-frosted-waterfall effect doors announcing our arrival. I’m convinced somewhere a church organist plays an imposing baroque tune. In we go.

Immediately inside Tommy and I are ushered to the host stand. It’s tucked in the bottom of a winding stairwell in what I can best describe as bordello red lighting. We’re early but they can seat us. The hostess flashes a rather flirty come hither kinda of a look and beckons for us to follow her up the stairs. I try not to objectify her on the way up although it kinda feels expected. Tommy and I are seated at a high top table across from the bar and adjacent to the piano. Immediately I feel underdressed in my jeans and sweater. Tommy isn’t much better in his untucked button down and khakis.

A sea of suits and cocktail dresses is before us. Everyone is so well attired, so manicured and good looking. Completing the, who let these bozos in feel, the valet arrives at our table cause I still have my car keys in my pocket. Classic. It’s incredibly, almost laughably dark in the restaurant; stone, wood, velvet. The waiters are all in white tuxedos with black bow ties. The bar glows with rows of brightly colored bottles perfectly arranged. It’s like we’ve walked onto the set of John Wick. Just as I think it, Tommy leans over and says “It looks like John Wick”. If you’re looking for that kinda sexy, Hollywood, hitman, neo-gangster kinda vibe in your restaurant, have I got the place for you. Naturally I start with an Absolut Martini shaken up, olives. What? Blue cheese olives? Oh John Wick Steakhouse! Tommy opts for a margarita inspired cocktail from their specialty list. The drinks quickly arrive so we “cheers” and sample quick. Any minute there could be a shoot out.

I have worked in more then one restaurant where an older patron complained it was too dark to see. These memories take center stage in my mind as Tommy and I twist, turn, remove the cap from the lamp on the table in an effort to catch enough light to read the menu. 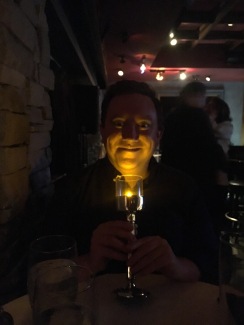 I am not joking, it’s that dark. Tommy wants my help picking out a steak, inexperienced in the art of steakhouse ways. Sadly I am far from expert but pass along what knowledge I have. We also ask the waitress for tips. It’s abundantly clear she thinks we are just the cutest middle aged gay couple out for a special occasion that you’d ever want to see. We order the King Crab stuffed mushrooms as an appetizer, me the Ribeye, Tommy the Filet, with sides of cream spinach and scalloped potatoes to share. When the King Crab stuffed mushrooms arrive the waitress scoops one onto each of our plates. Tommy’s topples over and the stuffing head falls off. He jokes about sending it back. I try to relay stories of my Aunt Sandra who sent everything back and behaved, well, Trumpian actually, at restaurants in my youth. I tell Tommy I always thought if I tried to write her into a story or screenplay people would say the character was too over the top and not believable. I wonder if such a thing exists anymore? The mushrooms are a delight.

The piano has come life. For a brief while it steals all of our focus. We start with a guessing game where Tommy tries to describe the singer based on her voice without looking; middling success. It’s a three person operation. The singer looks late twenties, Armenian or some sort of Persian if I had to guess. Perfectly curvy and it’s no secret in the form fitting, red cocktail dress she wears. Lovely voice, with a sultry air of mystery and danger in her manners that’s well cultivated. The piano player reads once promising talent now burnout. All-American handsome with messy hair, overly tanned, bloated, mannered and clearly phoning it in. Think down and out, fifty year old Don Johnson. The drummer looks mid twenties and completes the confusion of this trio. He wears the same white coat and black bow tie as the waiters. It makes me wonder if the drummer was a no show and this guy said, “I can fill in, somebody take a drink order on table 5!”. The music is a pleasant addition to the atmosphere, even if the drums seem loud and unnecessary. Tommy hilariously drives this home every time the drummer joins back in with a sarcastic “Oh great the drums are back”. Credit were credit is due, we keep watching and talking about the band the rest of the night, even once the steaks arrive.

The steaks! And we’re back to the true love that exists between a man and piece of meat. Pretty sure that came out wrong. You’re welcome. The ribeye is perfectly cooked at a medium-rare. The first bite: juicy, fatty, salty, rich, big protein, savory goodness. Elbows

hit the table, eyes close, twist of the head, exhale. Oh yeah. It really makes all the sense as a last meal. The Undisputed Heavy Weight Champion of American cuisine; steak. Not like we invented it, but does anyone do it better? Sometimes I just want to be a dude, and eat a steak, cause it’s the fucking best. And profanity is not only appropriate but legally required in that sentence. At intervals I scoop helpings of creamed spinach and scalloped potatoes into my gullet. Each time, the trip back to steak is melted chewy magic. To wash it down I selected the Napa Valley Trefethen Cabernet, (dark cherry, cigar box, tobacco, vanilla, cedar, well balanced with lasting finish). The by the glass list is surprisingly limited but the wine is great and pairs perfectly. Mmmmmm, steak. Yum steak. Ahhhh, steak. It’s gone before I realize. Tommy seems equally pleased. Mission steakhouse a success. We might even get out of here before the violence erupts. We pay the bill and feel around in the dark for our way out. The singer’s face is in spotlight, emerging from out of the darkness. I watch her croon as I pass. She slips me a devilish smile. It’s like something something from a dream. A dream of wealth and power but most of all steak.