It’s mid afternoon on my first full day in Palermo. The travel overachiever I am, I have already visited Teatro Massimo, Vucciria Market, Piazza Bellini, Quattro Canti, at least 8 churches, walked Via Bars all’Olivella, walked Via Roma, sat on the steps of the grand post office, had a beer with locals at Tavern Azzurna, lunched on panelle and photographed various street art. I’m having the time of my life. Also, it’s 96 degrees and humid. I am a sweaty mess of a man. Much of the city has turned to siesta. I try to take a break back at my AirBnB to plot my next move but it’s sauna inside. Luckily I had a plan in my back pocket all along. I summon my boldness, repack my bag and force myself to take the plunge by heading to Mondello Beach.

I know about Mondello Beach in so much as to say I read about it in my Rick Steves Sicily guidebook. Exploring Old Town Palermo was the day’s plan with a casual “and if I have time” tucked away in the back of my brain for Mondello. But probably too ambitious. See it’s a 40 minute public bus ride and who knew if I’d be game or have time? Full to the seams with wonder and history and culture  turns out what I need most right now is to cool off. Color me game. I’m at the mercy of my phone’s guidance when I find the bus stop. One transfer to make. Shades of a youth long gone by I wait at the bus stop with exact change jingling in my hand. Only when the bus pulls up and I step aboard I can’t locate any slot to dump my coins. Turns out this isn’t 1989 in Brooklyn. Quickly I remember public transportation in Italy requires you to purchase tickets before boarding. It’s an honor system of sorts, where fare enforcers only board and check tickets some of the time. Johnny Giacalone: International Criminal. The eight stops to the transfer are bit stressful. No one ever checks for tickets. At my transfer point I ask a local waiting at the bus stop where I can purchase a ticket. He gives me the warmest, goofiest smile and hands his over to me. Before I can protest he says “ciao”, waves and walks off. The New Yorker in me is convinced I am being punked but at that very moment the bus rolls up. My eternal impatience makes a gambler out of me. This time, an official stands just inside the doorway checking tickets. The ticket is good. Quickly the bus rolls out of Old Town Palermo. The streets stretch wider as modern high rises replace ancient buildings. A different city comes into view. Out the window it passes as quickly as it came, replaced by parks. A twist, a left turn and I see it glistening before me. An ocean of yellow umbrellas, a moat to the sea beyond; a hint of salt in the air. Now arriving at Mondello Beach.

At the entrance a sign reads SOLD OUT. My heart drops. The Italian I was practicing falls away as I launch into a desperate plea to the ticket taker. She instantly waves me off. It’s 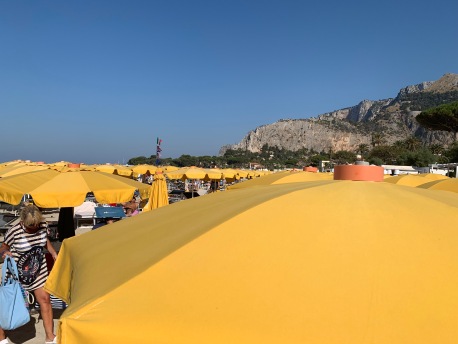 just after 3pm and spots have opened up. I pay my 7 euros which grants me entrance to the private beach, an umbrella, two beach chairs and access to the refreshments. Once I step inside a teenager leads me through a maze of umbrellas and sand to my assigned spot. When he points to my umbrella what is really hard to miss are the two 20s something blonde women with large breasts sunbathing topless. No one, anywhere else, is topless. These ladies have turned their chairs to maximize their exposure (ha-ha) to the sun. This means in they are directly in front of me, facing me. With the cool, calm ,class of a worldly traveler I turn to the teenager and whisper under my breath “get the fuck out of here, these are my seats?”. A holiday gift from Palermo to me. Behind me a group of 50s something British ladies talk about Bo Derek and the movie 10. I’ve got a hunch why. Showcasing their range the ladies become entertainment in a surprising number of ways. When the girls decide it’s time to re-oil each other the lady from the couple to the right turns her boyfriend’s chair so it’s facing her instead. She takes hold of his chin when his head drifts too far and pulls it back her way. The young woman from the couple to the right full on slaps her guy across the face when she catches him starring. Before I leave a male beach employee appears at my side out of nowhere and conspiratorially murmurs “che Barbie”. His fingers are held together, he shakes his hand back and forth for emphasis.

The beach is framed on either side by mountains. Tan and jagged earth spotted with green. The water clean and cool blue. Shallow for a extended trip out to sea before 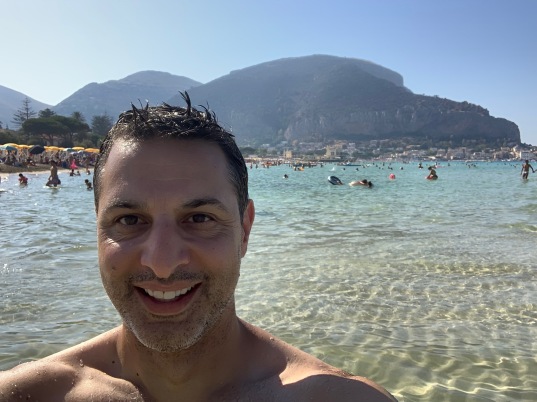 dropping dramatically in depth and temperature. The water is full of kids playing, couples kissing and old men showcasing especially tight speedos. The age diversity at Mondello strikes me. I make it to the beach a fair amount in Los Angeles where I rarely spy beach goers past their 30s. Everyone seems so at peace with themselves and their bodies. A calm walk to the water becomes a sprint when the sand scorches my feet. The ocean is the embodiment of refreshment on this day. I float, I wade and I swim. I tell myself to hold on to this moment in time. You get few in life that are so perfect. For the next few hours I take turns reading, swimming in the ocean and enjoying the chaos caused by my young blonde friends. I don’t ever want to leave.

The bus is packed on the ride back to Palermo. I have my headphones on, swaying to music as my arm casually dangles from the straphanger. I love the feel of sand and sun on my face. I’m funny that way. People seem to hate how the salt water lives on their skin after the beach. I long for it. In fact, it’s one of my favorite feelings in the world. Sharp rays from the sun penetrate the bus window and find my face. A gentle breeze floats through on its’ heels. I am serene. Outside the world travels in reverse, beach subsides, parks, modern high rises, and Old Town Palermo. Two women in their 30’s stand in front of me on the bus. One looks like a chestnut haired Asia Argento. I debate proposing for citizenship. When I exit the bus one says “ciao” to me. Recorded as victory.

Instead of hopping on the transfer, I decided to foot it the rest of the way. Palermo meets the challenge. Somewhere along the walk as I snap photos of devotions and narrow cobble stone passageways, I see a name I recognize. I see my name. I’m walking down Via Giacalone. The street bearing my surname is located in what was once the Jewish ghetto (Fun fact – in Palermo the former Jewish ghetto and Arab ghetto are 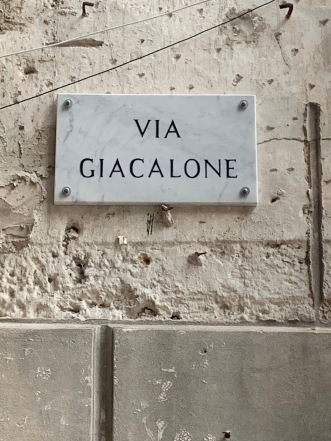 geographically intertwined. Prepare your best Israel/ Palestine jokes here). Further investigation yields an intriguing discovery; Giacalone was once a prominent Jewish family in Sicily that famously converted at the start of the Inquisition. I have no idea if that is my lineage.  Even if it was, the beginning of the Inquisition was 1231 A.D.! There is also a town of Giacalone in Sicily. All traces of my Grandfather’s roots have been lost, it’s not only possible but even likely his name was changed when he came through Ellis Island. But really who cares about that? I just peeked up and saw my name on the street I was walking on on the other side of the Atlantic. It anchors me.

A few minutes later I chew on an arancini I bought off a street vendor. Via Maqueda is good people watching. I lounge like I own the place, because, well, my name’s on it. Second day, second arancini. When I start walking home I get a message from my Cousin Joe. He and his family have arrived in Palermo. Joe invites me join them for dinner. I didn’t think I’d see anyone until I reached Syracuse. Little Joe helps his Dad by sending me a Google pin drop to show their location. I rush up to my AirbnB for a quick change and I’m back out heading their way.  I can’t get there soon enough. There’s never a bad time hanging with my cousins. What was it about perfect days? Everything seems to be going just right in this ancient and familiar city. 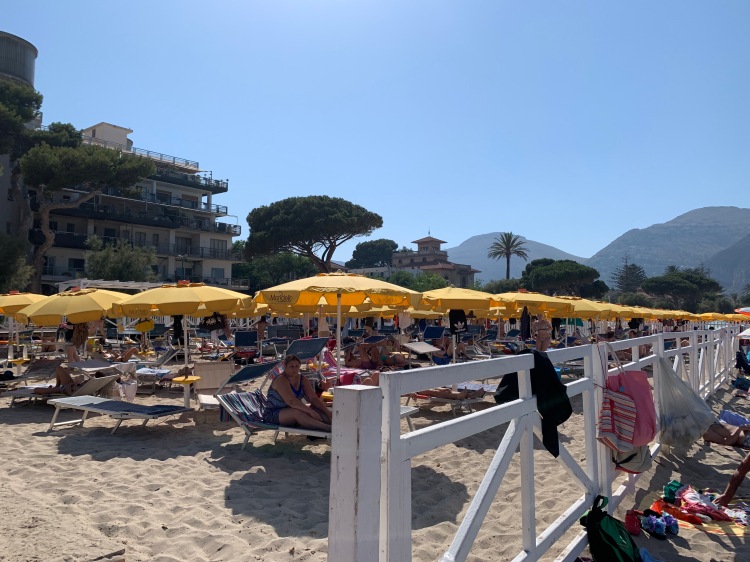 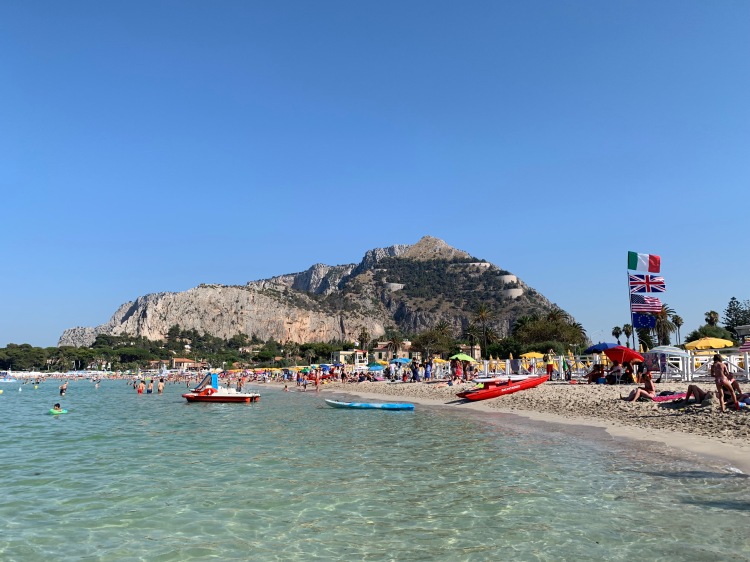 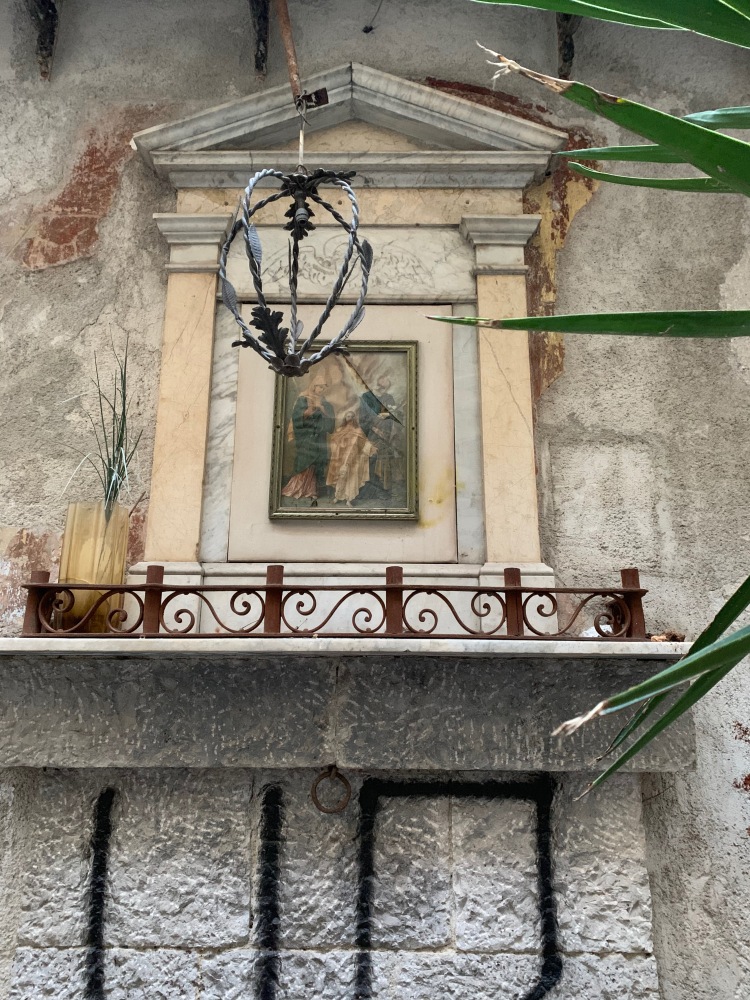 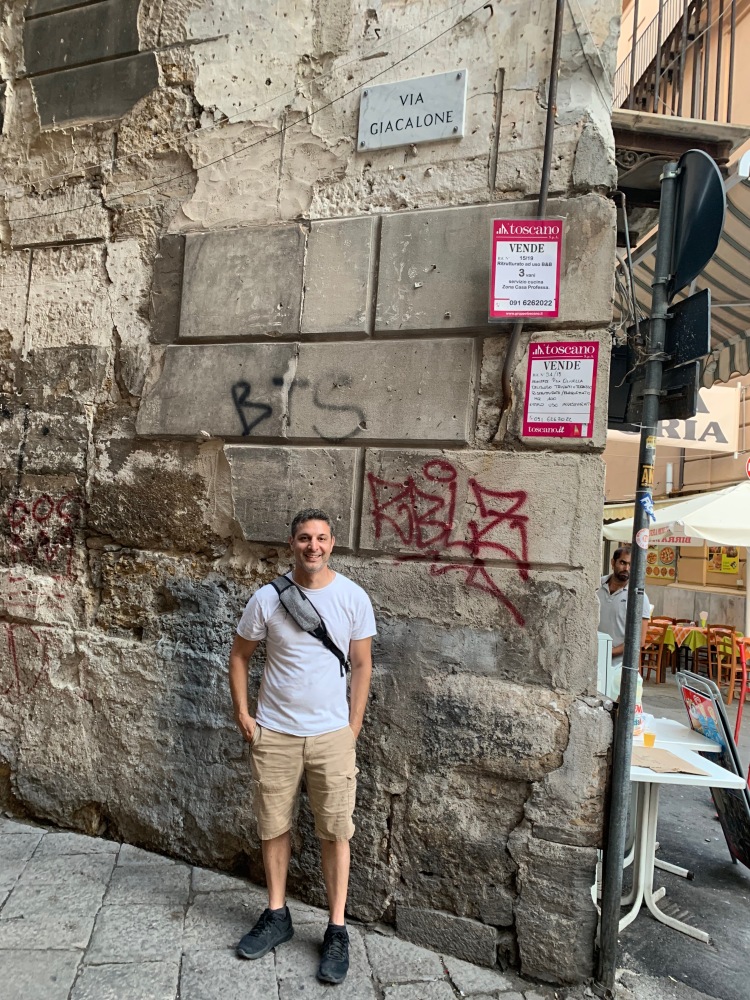 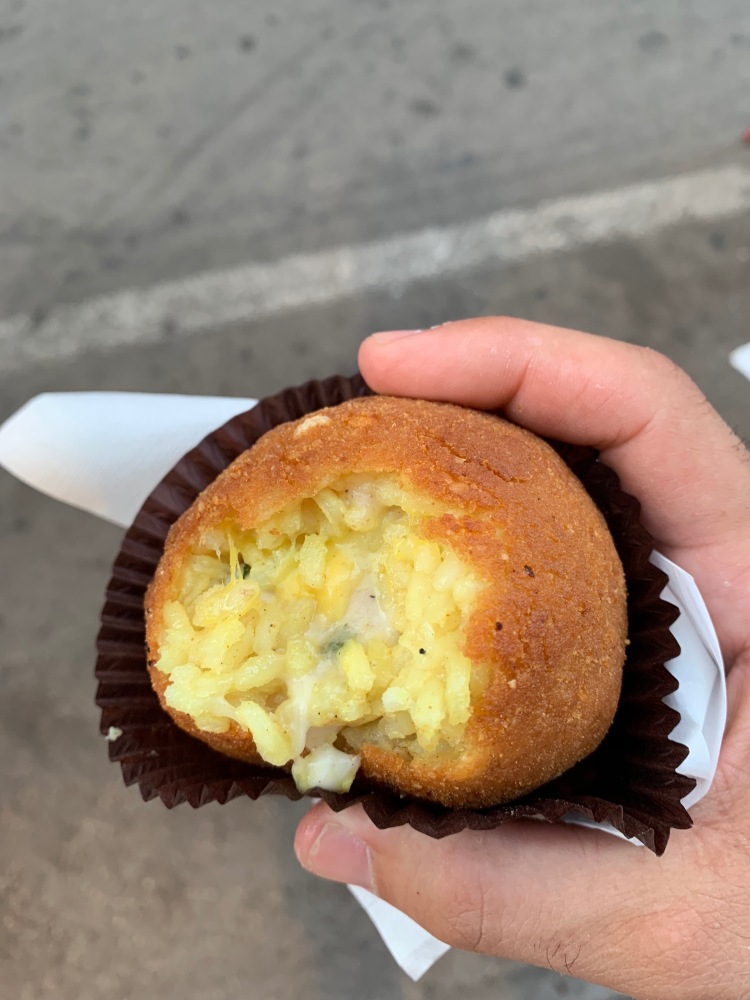 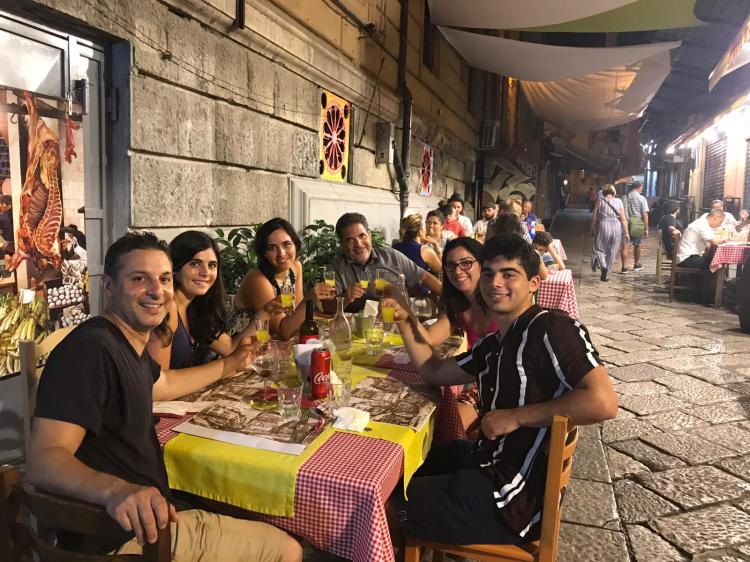