A long time ago before DVR’s, Roku, Fire Sticks and streaming television folks gathered around the boob tube at night to watch shows in real time; like when they actually aired. This is the strange and distant land I grew up in. Miniseries were events and the whole family watched. Speaking of strange and distant lands, I was a little kid when Shogun aired. Shogun the television miniseries is based on the novel by James Clavell. It made a HUGE impression on me. If you don’t know, the story is set in the 17th century, about English navigator John Blackthorne (Richard Chamberlain) who becomes shipwrecked off the coast of Japan and is held captive by samurais! Our hero is caught in complex political games and maneuvering while falling in forbidden love with his

married interpreter Lady Mariko (Yoko Shimada). I barely made it past night one when (SPOILER ALERT!!) one of the apprehended seaman is boiled alive. Some serious courage must have taken place to get me back for night two, but by the end the miniseries had captured my young imagination like previously only Star Wars had. I loved it and a fascination with Japanese culture was born. When I was young this led to special interest with anything far east, especially the aesthetics. Once I tried to convince my parents to buy me a samurai sword for my birthday. Shockingly, they did not bite. Next came food. Mom started taking me to a Japanese restaurant in Bay Ridge (the name is lost to time). Chicken teriyaki and hot sake fed my interest. In my teenage years, Dad started taking me for sushi. At first I wasn’t even sure I liked it, but I forced myself to acquire the taste. How many teenagers threw themselves an Akira Kurosawa marathon? This guy did. I even signed up to take Japanese as an elective my freshmen year at Vassar but didn’t get into the class. In college, my acting/film obsession went supernova and desire to learn all I could about Japanese culture faded to memory. The strongest link that’s held to this day, is my love of Japanese cuisine. And every time I am in a Japanese restaurant my little kid love creeps back. And every time I think about Shogun.

You know what doesn’t scream traditional Japanese culture? Encino. Still, that’s where I head tonight with good friend Joy who is craving sushi to try Katsu-Ya. Katsu-Ya is the brainchild of Katsuya Uechi. After apprenticing in sushi bars in Osaka, Tokyo and Okinawa, Uechi immigrated to the Los Angeles in 1984. In 1997 he opened the first Katsu-Ya in Studio City which quickly gained a loyal following. The restaurant bragged top-top- 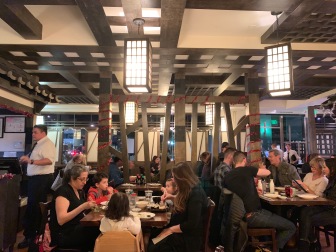 quality sushi and roba brought to you with Uechi’s distinctive style and designed for the Western palate. Roba, or robatayaki, “refers to a method of cooking, similar to barbecue in which items of food are cooked at varying speeds over hot charcoal”. In 2003 Uechi opened KOI in West Hollywood which earned rave reviews and plenty of attention for the chef. Much as I’d love to, I can’t afford to eat there or this blog post might be about that. Cheers! But it seems the attention and praise drawn by KOI helped spawn the Katsu-Ya empire. Encino came next and today there are 13 locations, including Las Vegas, South Beach, The Bahamas and Dubai. Kentaro Uechi (son of) is now the Executive Chef with Katsuya Uechi serving as CEO of this sushi and roba empire. A sidenote; It’s not the first nor will it be the last restaurant/chef I decide to write about that has been franchised. And I get it. They earned it, I’m eating here, the food is great. But sometimes the romantic in me misses the world of Mom & Pop restaurants that I fear are becoming an endangered species. Sidenote concluded, history established, back into the world of Katsu-Ya Encino.

Inside Katsu-Ya wood frames white; wood tables, chairs, sushi bar and beams. White plaster does the rest. No sliding paper doors, no floor tables but the spirit is present to invoke a traditional Japanese style decor. It’s enough for me to start feeling those Shogun pangs. I insist Joy refer to me as Johnny-san while we are dining. Okay, that part’s not true but looking back it’s a huge regret. The clientele is mixed with a fair amount of

plastic surgery on display and an abundance of families. Ah, the Valley. We start off with a bottle of Hakutsuru Sayuri Junmai Nigori. It’s an unfiltered sake, almost milky or creamy in texture, slightly sweet, showcasing fruity, citrusy, and floral flavors. Lite and pleasant. Joy taught me you are never supposed to pour your own sake, always instead it is the task of your dining partner. I love this tradition in the way it binds people together. However; I often forget until the last second, so usually just as I am about to pour for myself, I catch it and force a last second detour to Joy’s glass. Then I wait, hoping she takes the cue. Usually she does. Sometimes, I just stare at the bottle longingly. Joy is less wimpy and when I miss the cue will simply bark, “Hey, do your job”.

We’re starving, so bring on the fish. Crack the wooden chop sticks apart and rub them together in preparation. After we’re catching Aquaman and if I’m bored I plan on yelling, “I just ate your friends!” at the screen. We order Sautéed Garlic Albacore Sashimi, Salmon sushi, Popcorn shrimp, Soft-shell crab, Kiwi Scalliop with Yuzu Vinegrette, baked crab hand roll and some other rolls and stuff I can’t remember and like a terrible scribe, didn’t seem to record. All the fish is melt in your mouth fresh. Joy teases on her recent

adventures in Victoria, Canada she had sushi as good, if not superior. I dive pieces of fish into the soy sauce and wasabi mixture I’ve created. The salmon simply dissolves in my mouth. The Kiwi Scallop with Yuzu Vinaigrette is a particular delight. The fresh fruity kiwi, perfectly prepared scallop, burst of citrus with a hint of heat from a precise jalapeño sauce drip. It’s a beautiful dish to look at and pleasantly playful bite. The food is top quality. A yummy, savory meal.

The sake is kicked and tummies full. Jason Momoa is waiting. We close up shop at Katsu-Ya our hunger satisfied. I really hope to visit Japan at some point in my life. In the meantime, as I researched this entry I discovered the FX is currently in pre-production of a 10 episode Shogun reboot. Oh boy, oh boy. Maybe my obsession will return with it.