For the second time on my trip, I visit the local pharmacy. Pharmacies in Paris have the same green, plus sign which marks marijuana dispensaries in LA. I get a private giggle every time. The same unassuming, lovely girl helps me. Well built, (as Hemingway would often say describing a woman in “A Moveable Feast”); curly, dirty blonde hair neatly pulled back, brown, thin glasses, green eyes, she is the inspiration for a quiet love story set in a small cabin by the sea. She greets me and we begin the same pantomime as last time, me speaking no French and her no English. She’s attentive while I resort to sounds, gestures and silent movie acting. Both times the game ends with a big “Ah!” as she’s deciphered the clue. This time allergy medication. After I pay I tell her, “Merci”, and a sweet smile crosses her lips. For no reason in particular I will call her Jacqueline and assume in an alternate universe we live in that cabin.

A note about the ladies of France. Any number of times in my life male friends or acquaintances will try to rope me into this debate about which city has the most attractive women. Never had much use for it. I’ve spent most of my life in NY and LA; lots of pretty women.  What’s your point? But here, I have to comment, the ladies of Paris are hard to miss. I have a thing for French girls? Live and learn.

The allergy medication works such wonders. I realize I should have been taking it for days, that it explains my tightening throat and lost voice. That’s a too common pattern: needless suffering. Subject for a short story.

Saturday I am out early and take the train across Paris to see the Eiffel Tower. I exit one stop away. I want to walk up on the grand landmark. Immediately, I see runners. What is this race? Everyone is wearing the same green shirt that says “Breakfast Run” and instantly I’m mad at myself. I should have looked to see if I could run a race while here. There’s a large park in front of the Eiffel Tower where I stand jealous amongst runners snapping photos like a tourist. Three runners next to me are speaking in English and we quickly strike up a conversation. They ask me if I’m running tomorrow and why I skipped the Breakfast Run? The Breakfast Run is a warm up event for the Paris marathon, tomorrow. I realize I’m wearing a Big Sur Marathon sweatshirt. The ladies are early 30’s from Orange County, funny enough. Both are Asian; one tall and thin, the other short and stocky, as if specifically for contrast. With them is a young, slightly chubby and aggressively un-groomed man from Denmark who speaks with no accent at all. They start peppering me with questions about Big Sur, the shorter of the girls is doing that race next. Two marathons in back to back months, I am so impressed. I don’t think my body would hold up. Strength and determination, not form and efficiency (my runners gait analysis). I ask them about the Paris marathon. I’m jealous. But we are all instantly friends,  this sub culture I find so very inviting. I love being amongst runners. I resolve to watch some tomorrow, on my last day. I must run 26.2 again, I think. I will run 26.2 again, I think. I bury my anxieties, say goodbye and march on toward the Eiffel Tower.

I don’t climb the Eiffel Tower. Time will tell if I come to regret this choice.

Maybe it’s the end of a long week of sites. 35 minute wait just to begin the climb, 25 Euros to the top. Maybe it’s cause Irit discouraged me saying it’s the touristy Paris thing everyone wants to do but she thinks you are better off finding a great place to look at it from far away, versus spending hours fighting crowds to climb to the top only to see all of Paris without it’s most important piece of scenery. Either way, I listen to myself. I listen to Irit. I circle it and circle some more. I photograph it. I breathe it in. Then I slip down to the Seine and grab an espresso and a crepe.

I suppose I’ve got one more museum in me when I remember the Museum of Wine, a circled site from my guide book, is walking distance from the Eiffel Tower. Along the Seine I stroll. I cross into a neighborhood of high rises, modern and nothing like the rest of Paris I’ve seen. At the museum I’m met by a twenty something guy, classical French 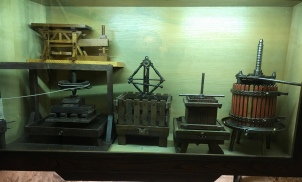 looks with the delicate features of a model. He is more put off by my lack of French then any person I’ve met so far. “Parlez vous Anglese?”, thick accent responds, “Of course I speak English” He’s so annoyed. The eye rolls never stop. I can’t help smirking. I tour the museum. It’s in an old underground wine cellar full of all the charm you’d hope. Head starts to whirl, seeping in through the the stone are my worries. I struggle to follow the quick, uninspired English audio guide. I’m confused and getting lost but is it the tour or me? Is this forcing real life and real responsibilities back in? Hemingway, 30 Nights premiere, the magic of Paris have me back in the head of an artist. 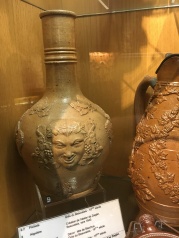 That’s where I feel at home. Not now crazy brain! I bark back. Forcefully I shake it off and I find my groove. Who cares if I learn nothing on this tour? There’s wine at the end! “White”, I say after a quick debate when my greeter, now Somm, is set to pour me my complimentary glass of wine upon tour completion. I ask the grapes, he says dismissively I won’t know them. “But tell me anyway”, I say with what I think is playful charm. 2 grapes, I know one. He rolls his eyes. I drink, (color of sun drenched straw, it’s dry, high acid, intense pears and grapefruit). Not what I’d usually drink but I swirl and sip all the same. Greeter/Somm has an adolescent assistant with glasses and acne who scurries about that I’m sure he beats.

As I walk the Seine back a man dressed as a circus clown snaps a photo of a man on one knee presenting a diamond ring to his girlfriend under the Eiffel Tower.

Further down the Seine I walk by a spot marked where Princess Diana met her untimely end. Flowers and offerings mark the site.

Bistro hopped drinking a few glasses of wine (why focus on numbers here?). The best was a glass of Chateau Victoria Bordeaux (plums and figs with a medium tannin finish).

Saturday night I once again go out with Irit. She wants to take me to place that serves all “natural” wine which has become the rage here. It basically just means they add no sulfites or preservatives or sugar and so it’s all natural ingredients and bottling. All wines designed to be consumed young. She tells me it’s a rebellion against the old school, stuffy wine making ways of France. We’re always celebrating and fighting the past. The whites are lovely. I have two Sauvignon Blancs, (the better tastes of kiwi and Meyer lemon light bodied with a refreshing finish). The reds leave a GREAT deal to be desired. One is quite possibly the worst wine I have ever tasted. For some crazy reason we start by discussing infidelity. Irit has deep thoughts about how men and women take the betrayal differently, though she believes both feel the sting. I tell her my impression is the French are more accepting of adultery. She tells me when she first came to Paris she learned the language by watching French comedies and every one is exactly the same story. A married man has a difficult, demanding wife, and a young, buxom mistress who adores him completely and he is in the middle like “What can I do? Life is crazy!”. It makes me laugh. For hours and many rounds of tapas and wine we have more inspired conversation. The tapas highlights all ordered by Irit, including white beans with citrus glaze and salt, pickled peppered egg, chicken pate, and sausage she tells me is made from the cow’s anus and cooked in lard, just as I pop one in my mouth. I regret having this knowledge. We debate monogamy, the #metoo movement, my impressions of Israel and her experiences growing up in Israel. Fun, real, humorous. They used to be commonplace but this night feel like water in the desert. Irit has a clear, intellectual and insightful demeanor that also showcases her melancholy vulnerability. She keeps referring to herself as a “mustached feminist” like it’s the punchline to a long joke. We drank a great deal of wine till very late and by the time I stumble into my room I take another allergy pill, this time welcoming the drowsy effects and pass out. Best night of sleep I get in weeks.