On Saturday I do what’s worked. I go back out snorkeling. A different company, a different destination, same blue bath water. Funny thing about this time,

I am the only person going on the charter. No one else signed up and, surprisingly, the company honors it. My private guide’s name is Abraham. He lives in Seine Bight. He’s lived there his whole life, never even been anywhere outside of Belize. He loves the ocean, and diving, so why go? What else is there to see? We chat on the dock. He whisper complains to me about the “boss lady”, how mean she is and how she steals his tip money. But jobs are hard to come by in Placencia. He tells me there are too many Mexicans moving in. Soon we are out on the water. The sea is so calm it’s like glass.

We go to Laughing Bird Cayes. The laughing birds are nesting on one side of the island, given their name cause when they squawk it sounds like Minnie Mouse just heard a great joke. 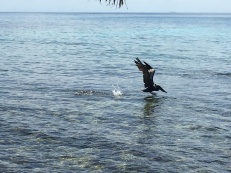 It’s blistering hot. Abraham warns me I should wear a shirt, even in the water, or I’ll get scorched. I don’t and I do. Since it’s just me, no wandering off this time. I get an in depth tour of the coral reef and the sea life that makes it’s home here. There’s rain coral, fire coral, elk coral, clown flounder, snapper, parrot fish, lion fish, sea urchin, squid, sea cucumber, porcupine puffer fish, barracuda, and it goes on and on. I see wild, colorful, fantastical creatures of the ocean. At one point, Abraham dives down and seems to pick a fight with a lobster. Eventually he catches it, and holds it up to me proudly. “That’s how we catch them in Placencia”. It’s the biggest lobster I have ever seen. I feel a little bad for it, but the fight was something to see. It’s a protected reserve so after he lets me examine, the giant lobster is returned to the water. After 2 hours we are back on the island. Abraham says he can’t believe I went so long. He said he kept waiting for me to tire. I didn’t. We have lunch. The island is teeming with locals. Abraham told me  when it’s like this folks pile in someone’s boat and come to Laughing Bird Keyes to picnic. Not a bad Saturday escape from the heat. Best picnic spot I’ve ever seen. He’s anxious to join them and he does. They are drinking, smoking, laughing, talking, eating. I lie on a lounge chair in the shade and contemplate the palm trees. 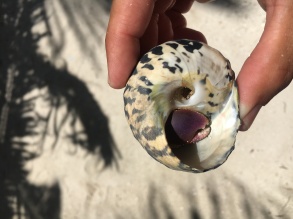 A hermit crab wanders by to say hi. Eventually we go in again; this would never get old for me. The weightless feeling of the water, the brilliant array of colorful ocean creatures. The peace I feel on the boat ride back feels lasting. The wind on face; sublime. Abraham keeps trying to cover me with towels. It’s too hot, the sun too strong. He seems very concerned, but I want to feel it. I want the sun, the wind and my eyes on the waters as we race across it back to town. An large iguana sunbathes on the dock as we pull in.

The road in Placencia has speed “humps” every few miles. The road isn’t patrolled. “Sleeping police” my cabbie home calls them. I’m heading back to the hotel.

Reading for a bit on the beach, I buy a bracelet off a Mayan. I don’t meet any Mayans in Placencia, though I see them everywhere. They wander the beach and the streets of town selling bracelets, necklaces, hand woven purses and wood carvings. They are all very short, broad, with orange- brown skin and distrustful eyes. They are the only folks in Placencia that don’t seem friendly. I’m told they “keep to themselves” and don’t like to mix. I try to engage this vendor. He’s not interested.

I find out my flight home has been cancelled. Hurricane Harvey is pulling into Houston, which coincidentally is the main hub for American tourists heading in and out of Belize. For what follows I work hard to remind myself destruction and worse is heading to those poor folks in Texas and I am simply “stuck” in paradise longer. But I’d be lying if I didn’t confess it feels a bit stressful for me. Always money. Fucking money. How will I afford more days? How many more days? A few hours are lost trying to sort through the maze. My dear friend Joy, as always, a rockstar angel, helps me remote from home.

I go to the front desk, seeing if I can extend my stay and change my small plane flight, now that Joy saved the day with the flight back to LAX via Miami. There I meet Nate and Andrea. I’ve seen them around the hotel but we’ve had no contact. They are on the same flight as me, via Houston and are also delayed. We commiserate. I end up accepting an invitation to go to a local sports bar to watch the Mayweather vs. McGregor fight. In a meant to be way, it turns out to be a perfect venue and the beginning of a friendship.

The Flying Pig; on the beach, a bar with a roof but no walls. It’s still so stifling hot and at first I feel I can barely breathe when we arrive. I order a bottle of beer and just hold it to my neck to cool down. I am burning up. Nate and Andrea seem fine companions for the night. She’s a talker, and not shy about sharing. On many people it might be too much, but she has the charm, wit and generosity of spirit to pull it off brilliantly. Nate is nice but curt; at least at first.

A Maritime Academy graduate, former ship captain, he now oversees Pacific shipping routes for oil tankers. He has the gate of a military man. They exude a distinctly American strength and confidence that contrasts to most of the Placencia locals I’ve been around since arriving in Belize. The Flying Pig is run by an American ex-Pat whose mother told him he’d own a bar on the beach “when pigs fly”. He’s a fat, jolly, sweaty man who goes out of his way to make us feel welcome. Nate and Andrea discovered the bar earlier in their stay. They had some beef with an old sea captain looking bar local, but it seems all is forgiven tonight. The owner tells us, “don’t mind him, he just likes his edibles”. Besides us it’s all locals. The bar is lined with old, leathery men in sweaty tank tops and shorts. The rest a mix of Spanish and other ex-Pats, with kids and stray dogs at your feet as smoke plumes into the air and out at the sides where walls are not. Beers are $1.50 US. The TV’s are grainy but good enough to see the fight. I cheer with the rest. I route hard for Mayweather. I just can’t help it, I hate the UFC. It’s personal and for a brief moment I tussle with all that comes with that. Plus, I respect greatness. I know he’s an ass, but Mayweather is 49-0. It’s a very entertaining fight and Mayweather wins. Many beers are consumed. In the cab home we pass Seine Bight. There is one shack that is jumping. Blue light glows, music plays and a crowd can be seen sweaty, bumping and grinding inside, smoking joints and drinking outside. It’s dark and hot and seductive and dangerous. For an instant, I want to jump out and slip in to the night games. The cabbie from Guatemala suddenly says, “All these people do is drink. They don’t take care of their kids. They don’t work”. I still can’t sleep when I’m home but I am finally peaceful at night. I drift in bed and feel the sway of the ocean from the days’ early adventures snorkeling. The bed rocks with the tide. I wish I could achieve this feeling every night.