LA’s Koreatown was never much of a destination for me. What first drew me into Los Angeles, as a New York transplant, was the natural wonder and beauty of this city. It somehow casually existed amidst a thriving modern metropolis. The warm Hollywood nights framed by palm trees and mountains in the distance, the beach cities, vast sky, winding hilltop roads, and the canyons for hiking hiding in the middle of everything. And frankly, for pure urban, nothing beats my hometown of New York City. Go Yanks! Koreatown always felt more drab city than LA wonder. It appears dominated by brick buildings, store fronts, businesses, bustling city streets. But around 4 years ago I went on a date for BBQ in Koreatown. She took me to Kang Ho Dong Baekjeong. I’ve been trying to give Koreatown more of chance ever since, there’s a lot more to explore than meets the eye.

Kang Ho Dong Baekjeong is a Korean BBQ restaurant in LA’s Koreatown, and at several other spots around the globe. Kang Ho-dong is a South Korean television host, comedian and former top Korean traditional wrestler. Along the way he seems to have acquired title of National MC, which he shares with Yoo Jae Suk. 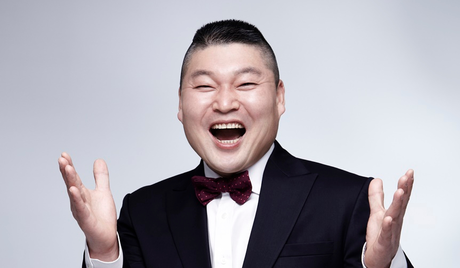 To my understanding this is an honorary title and fits into a series of such titles South Koreans love to bestow on their celebrities. I tried to watch some You Tube videos of Kang Ho-dong before writing this entry. There is a whole world there to explore, another time. Something is lost for me in translation, but he is undeniably life-of-the-party charismatic. How close he is associated with the restaurant chain is unclear. The Kang Ho Dong Baekjeong website doesn’t work. There is only a one line mention of his BBQ chain on his Wikipedia page, (I’m a crackerjack researcher!). There is a lot of information about his rise to fame, arranged marriage, tv shows, tax evasion charges and return to tv glory. I wonder if Kang Ho Dong Baekjeong plays as a kind of Korean Planet Hollywood, except for the fact that it’s such high quality. They don’t take reservations and just consult Yelp for the many warnings about how long you have to wait outside before getting a table on a busy night. I myself spent an hour or more one Christmas time with family. Today the wait isn’t so long. Let’s get to it.

The restaurant is on 6th street, but hanging a right on Kenmore and quick left into the alleyway is how this adventure begins. There is a large open courtyard disguised by the facade of buildings. Driving by, you’d never know it was here. The courtyard contains a valet and the entrance to several Koreatown bars and restaurants. It’s bustling with energy and excitement and casts a wildly different glow than the streets out front. No more rundown dank city sidewalks, you are suddenly in a night on the town, vibrant oasis. We valet the car and put our name in for Kang Ho Dong Baekjeong; about a 20 minute wait we are told. I am with my good friend Tommy. To name his many sparkling positive attributes would take too long, so I’m skipping to the important part. He’s extremely funny and I hope to rob some jokes and here pass them off as my own. Immediately Tommy is distracted by the bar across the courtyard, Toe Bang. The name does not sit well with him, so naturally he compulsively makes overtures to visiting next time. Through the windows I can see the Dodgers are on and I think to myself, “I bet it would be a good place for a Hite”, (just tossing casual Korean beer reference in cause I am cool and cultured).

The smell of meat hits you like a wave. The restaurant is filled with smoke. Electronica music blares. Cartoon pictures of Kang Ho-dong adorn the walls. Tommy does a tight 5 on the music and atmosphere: “We’ll take the pork rib and bump of cocaine”. “Are we inside an Entourage episode?” “We should come back here and do Molly”. The smells, the smoke, the music, the crowd, the hurrying servers, certainly lends to a “we’re gonna have the best night of our lives” feel. One starts to think about how fast they can get inebriated and what trouble to get into next? Who cares about tomorrow!! In front of us is a burner and several metal bowls of different appetizers, sides and mixers for your meal; romaine salad, kimchi, kimchi pancake, dipping sauces for the meat, a squash side, onions & bean sprouts with a “special sauce”. 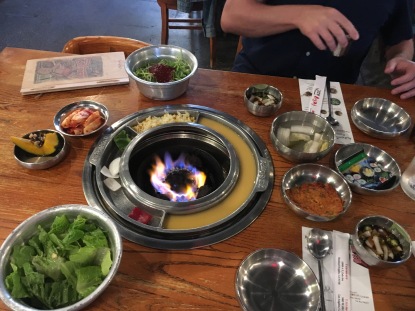 Tommy suddenly makes a note in his phone to add kimchi to the grocery list which I find hilarious. Egg and a corn and cheese mixture are already cooking on the burner. Water is on the table in the form of a plain, cheap looking, plastic water container with label scratched off. The servers are all in black with secret service-like ear pieces. Every so often they all shout something in Korean, which our server later explains is a welcome greeting. Coaxing explanations can be difficult, and accents hard to understand, but the servers are very attentive, doing pretty much all the cooking and grill maintenance for you. We order pork dumplings and the small beef combo.

We start off with the dumplings and spicy kimchi soup that’s included with our combo. 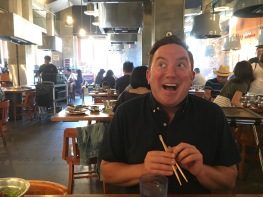 The soup is a spicy, savory delight. When I order the Kook Soon Dang rice wine the waiter asks, “Are you sure?”, and continues before I answer, “It’s very traditional”. “Then yes, I’m sure”. The Kook Soon Dang, is cloudy, like rice water or unfiltered sake. It’s slightly carbonated, tastes of lemon-lime, almond, grass, and chalk. The meat starts and doesn’t stop. The beef combo delivers several different thin sliced cuts of meat that our server expertly grills. Flavorful and tender we dip them in marinades, wrap in romaine, rinse and repeat. Beef is on the brain. We discuss the existence of “meat sweats”. Tommy is convinced the smoke must have us smelling like walking beef pops. For a moment, we drift off high brow topics like “meat sweats” and fall down the hole of the current political climate. Like any two sane people wrestling with today’s insane world, we go a little crazy examining. 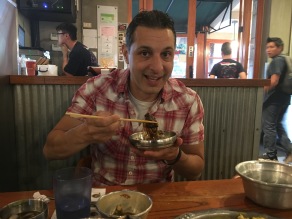 I recently learned from Tommy’s podcast What’s That Smell?, (do yourself a favor and listen), that anxiety about the direction our country is headed has replaced money as the top worry for Americans. Good times. But in the depths of these heavy woes, the electronica wont be denied. The steam room of meat smoke cleanses our spirits. Those few lingering pieces of grilled beef mixed with bean sprouts and onions makes their way into our bellies. That ride or die feel is back! Mission Korean BBQ is a rousing success and I’m sure I’ll be back. The meal is ended. We wonder what debauchery will we get up to next? Like the wild men we are, we head back to Tommy’s apartment, have a few drinks and play with our dogs. If Harlow’s reaction was any indicator, I did smell like a beef pop.