There are no tours for me to jump on Friday. They require minimums of 4 people and only the, “your own private island for the day” tour is heading out, which when I read the description can’t help but sounding like, “go fuck on an island!”. I am not handling the news well. Anxiety builds and I pace my room like a maniac. The past two and a half days make me feel like a puppy, who can’t relax until first exhausted. Mind racing, I just can’t figure out what to do with myself. A day sitting at the pool sounds like torture. What is wrong with me? Isn’t that why I came? I settle on Jet Skiing. I saw the sign but decided to skip. I LOVE Jet Skiing but I’ve done many times and thought my money better spent on activities I could only do here. So much for that.

I take a bike from the hotel and roll out. Shortly into my ride I realize I missed the Jet Ski turn off but instead of turning around, I decide to keep exploring.

I pass through Maya Beach, the ex-pat part of Placencia. All Canadians and Americans I’m told – beautiful grand houses for a song on the water. There’s even a new condo community advertising for 70 grand a unit!! Then I cross into Seine Bight. It’s where many of the locals live. Creole is the sound of the streets. Belize is a mix of Mayan, African and what I can only describe as “assorted Central American”. But everyone in Seine Bight is dark as night. Rolling in after Maya Beach, there should be a sign, “Welcome to the Third World”. The houses are shacks on stilts. The stilts are to avoid the bugs and critters but during the day most folks are sitting under their houses. It’s the coolest place.

Not like anyone in Seine Bight has an AC. Unemployment is sky high here, I am told. The poverty is arresting. Most of these shacks can’t be more then 300 square feet and how many people live in each? The windows are open, (no screens) and I peer inside to see nothing. A rotting wood room with no running water, one exposed light bulb, no furniture no decorations on the wall, a few mats, handful of spices and boxes of pantry food items on a ledge. None of the tons of modern conveniences we “need”. I think of how materialistic my life must seem in comparison. The great irony? It’s beach front property. Wild dogs are everywhere. Lean mutts with the calmest and gentlest disposition I’ve ever seen wandering the streets. I was warned not to pet them. I do. They seem only confused by the affection. Litter and garbage fill the shoulder of the road. Their clothes look dirty, mismatched, but always colorful. Hand painted signs advocating Christ’s love and redemption are hung everywhere. Kids run and giggle and lean sinewy men glare at me. Prior to this visit I wondered where all the old people were in Belize.

Every worker at the hotel is in their 20’s or maybe 30’s. The Grandmas are here, watching over flocks of kids. I still see very few old men, when I do they look worn down. It’s increasingly clear I’m an oddity. I snap some photos when I can but when I review my work it’s clear they do no justice to the assaulting beauty and poverty of the place. Some part of me is envious. Most everyone I encounter in Placencia is of a pleasant disposition. They have no cares for how social media makes them feel inadequate, no stress about car insurance or their internet not working. They just live on a strip of beach in what we’d describe as paradise. But I am a romantic.

I slow my bike for another unsuccessful photo. A woman and three men hide under a shack for shade. She calls out to me and asks how I am. I move closer. The men won’t meet my eye. I say, “Good”, and try to exchange pleasantries. She asks what I am doing and when I say out for a bike ride they chatter in Creole among themselves. I get the sense I am being mocked.

The men still ignore me, acting as though she is communicating with a spirit and not a man 4 feet away. Once I thought my ability with accents would forward my career; instead it’s nothing more then a parlor trick. But during this trip I’ve come to understand Creole is as much a dialect as a language, and I can understand a surprising amount. And of course, I’ve been trying it on, muttering to myself in “Johnny Creole” non-stop. It’s that which allows me to understand one guy who says, “He’s a white man on vacation. Probably has a mansion and a secretary back home”. “No secretary I say”. They seem shocked. For the first time the men turn their gaze my way, taking me in with suspicion. “You got to get one!” the lady shouts in joy breaking the tension. “I agree” I respond. I tell them to have a nice day as I ride away. I get no response. I am forgotten before I even leave.

Suddenly I’m light headed. I’ve been going for some distance with no water and my breakfast ran right through me (vacation belly! sorry! too much info!). I’ve sweated clear through my shirt and I am a not a sweater. It’s in the high 90s and extremely humid. I’ve probably gone 15-20 miles on this roadster. I play with my new Creole dialect. A young girl catches me and looks in confusion and bolts in the other direction. I like to hope she ran home to tell Mom, “there’s a white man muttering to himself in gibberish!”. I wind up all the way at the airport. I ride to the edge of the dirt road runway that dead ends at the water. 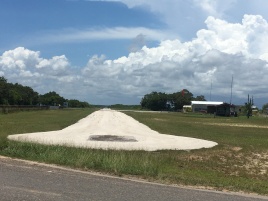 I’ve almost biked the whole peninsula. Finally I purchase a bottle of water, and begin the ride back. When I do eventually arrive at the Jet Ski rental, they only take cash and I don’t have enough on me. Funny. It doesn’t bother me at all. The bike ride, Seine Bight, that’s what I needed. The Jet Ski rental is a brand new, one man operation and he laments to me how he’s been waiting 3 months for a credit card machine. He’s from Montreal. His Hawaiian shirt lays unbuttoned and open against his sunburnt skin. A cigarette dangles from his lips, and the French accent flows. He says he moved here cause of global warming and that winters just got unbearable back home. He’s answered by a cook from the neighboring restaurant sitting outside on a smoke break, “I’m moving to Canada. It never used to be so hot here in Belize. Now it’s just too much”.

I make it back to the hotel, change and head to the pool. I think I can try out relaxing for a bit. 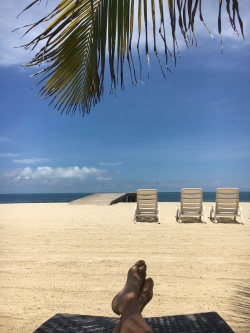 I dive into my book, Jewel Trader of Pegu. It’s about a Jewish gem trader from Venice in 1598 traveling to the Burmese kingdom of Pegu. I like to read books on vacation that compliment my adventure. It’s good reading, even as it contrasts to the calypso sounds that populate my ears. I’m often amazed how every song is put to the same calypso sound down here and it’s magically upbeat and perfect to dance to. The most depressing Adele song is playing, remixed and its boogie time. You really haven’t heard “Hello From the Other Side” until it’s accompanied by steel drums. Really it’s hard to concentrate on the book, or the music. Brain swirls with the days sites and sites I dream that are yet to come. My travel bug is on. I spent youth obsessed with plays and chasing my career jones. I missed out on this exploring stuff. Now it’s all I want. And I always want more, so much more. A list of destinations to see grows in my head.